RBNZ has released new video and written guides to help Kiwis spot fake versions of the Series 7 “brighter money” banknotes, that may otherwise have gone under the radar. The bank advises New Zealanders to use the same method as is used by international central banks.

There are a number of key sensory features unique to authentic New Zealand banknotes. Here’s what to look for and how to spot them:

Look through the holographic window. The edges of the window should look smooth and you should be able to see the bird’s silhouette, the map of New Zealand and the 3D feature showing the value of the banknote.

If it’s an authentic New Zealand banknote, you should be able to feel the raised ink on both the denomination of the note and the letters at the top.

When you tilt the note, a bright shining bar should roll across the bird’s silhouette on the front, and the holographic window colours should shift and change, revealing fine details.

“New Zealand has a low counterfeit rate by international standards and the [RBNZ] wants to keep it that way. One of the ways we can do this is by ensuring the public know how to identify the security features on our banknotes, Mr Gordon says.

The “new look” banknotes, designed to help increase the security of the currency, has divided New Zealanders. Some are fans of the bright colours, whereas others have compared it to the paper notes used in board game Monopoloy.

“This milestone is a great opportunity to reflect on a point in time and see how our banking has evolved and how our money has changed over the years,” RBNZ governor Graeme Wheeler says in a media release.

“Despite the growth in electronic payment systems, cash in circulation continues to grow and I expect cash, as a means of exchange, to be around for a long time yet,” Mr Wheeler says.

The RBNZ is soon going to start researching the reasons why New Zealanders continue to use cash.

New Zealand notes: What are the new features of "Brighter Money" 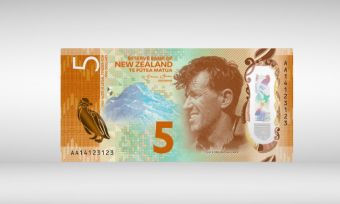 Our Money Is Getting Brighter