The World Health Organisation (WHO) has made a disturbing announcement. The favourite food of many people, bacon is supposedly cancer-causing.

The conclusion was made based on more than 800 studies assessing the link between the consumption of red meat or processed meat in many countries and more than a dozen types of cancer.

Processed meats, which includes foods like bacon, hot dogs, ham, sausages and corned beef, were classified by the organisation as a “group 1” carcinogen based on “sufficient evidence” associating it with colon cancer.

That puts bacon (and other processed meats) amongst things like cigarettes, alcohol and asbestos which are determined to be carcinogenic to humans. The 22 experts from ten countries working for WHO’s International Agency for Research on Cancer (IRAC) concluded that each daily 50 gram portion of processed meat increased the risk of colon cancer by 18%.

Non-processed red meats such as beef, lamb and pork were put in the “group 2A” category as “probably carcinogenic to humans” with links to other cancers, namely pancreatic and prostate cancer.

Should I permanently swear off all processed and red meats?

Although the news will make people think twice about wrapping their sausages in bacon too often, there isn’t really a need to avoid all processed and red meats altogether.

Professor Tim Key from Cancer Research UK said if you eat lots of it you should think about cutting down.

“Eating a bacon bap [sandwich] every once in a while isn’t going to do much harm – having a healthy diet is all about moderation,” he said.

It should really come as no surprise that eating too much of something which is fried, greasy and full of salt is unhealthy, but a little amount shouldn’t cause much harm.

Putting it in context, IRAC quoted estimates that about 34,000 cancer deaths worldwide each year are linked to diets high in processed meat – a small number compared to smoking (1 million) and alcohol (600,000).

So, despite being put in the same carcinogenic category – these meats are not quite as bad for you as smoking and alcohol. Even the world’s oldest person, 116-year-old Susannah Mushatt Jones eats bacon every day.

Can you diet your way to good health?

WHO’s announcement caused quite a stir in the online community, revealing how passionate people are about their processed meats – especially bacon. On twitter, the #bacon hashtag was trending in Australia. Here are some of the things people have been saying:

As you would expect, meat industry groups were less than impressed with WHO’s news, arguing that cancer is caused by a variety of factors, not single types of food, Associated Press reported.

Australian Agricultural Minister Barnaby Joyce said on ABC radio this morning that it is a “farce” to compare processed meats such as sausages with cigarettes.

“A lot of people don’t have bacon every day. If you got everything the WHO says is carcinogenic and took it out of your diet, well you’re heading back to a cave,” he said.

“If you were going to avoid everything that has any correlation with cancer then don’t walk outside, don’t walk the streets in Sydney. There’s going to be very little in life that you actually do in the end.” 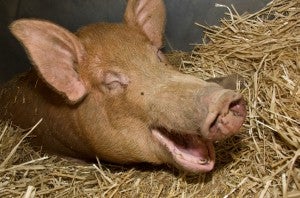 If you are worried about your consumption level of processed and red meat, Australia’s National Dietary Guidelines suggest that for an adult, no more than 65-100 grams of cooked red meat, three to four times a week is okay. Having a bacon sandwich or barbequed sausage every now and then is alright as well, so long as it is not on a daily basis. Above all, balancing your diet, maintaining an active lifestyle and keeping to an acceptable weight are the best ways to remain healthy.